Senior climate scientist have many reactions to what they’re discovering about climate change – excitement, shock, (the ‘Oh my God’ moments) disappointment, sadness – as well as sometimes having to deal with attacks from colleagues and the media if they ‘become political’ and engage publicly, speaking up about what they’re finding. In this difficult environment some scientists engage in the distancing and detachment which professionalization and specialization make possible. 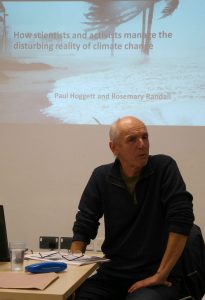 About 45 people came to hear Professor Paul Hoggett talk about the results of his interview research about how climate scientists and activists deal with emerging difficult truths.  Paul contrasted the scientists with a group of climate camp activists, who were much more supportive of each other in their group and overt about their dismay and depression as well as the excitement and fun of direct action.  Often they burnt out, but by the time of the interview many had found more emotionally sustainable forms of action to promote a low carbon society.

Discussion continued without a break for two hours.  How can we communicate with those in ‘mainstream culture’ about climate change without provoking withdrawal and defensiveness because the problem is so vast and difficult?

Paul argued that approaching people with the intention of changing them, fails.  But approaching people with curiosity about their beliefs and aspirations, and expecting them to be curious about us, can result in real dialogue and sometime change. Like the scientists, we all at times ‘park’ uncomfortable knowledge about climate change, or choose to ignore the fact that our choices have climate impacts. We can find ourselves using ‘internal propaganda’ eg I don’t have time to use the bus, which may embody an assumption of entitlement, greater than others, to our current lifestyle. But if we can understand our own levels of denial, we are more able to communicate with others.

Discussion ranged from the social constructed silence about the unlikelihood of staying below the 2 degree line, to geo-engineering, the current situation with the Heathrow decision jeopardizing UK climate targets, the use of direct action and the value of alliances between climate scientists and those taking public action.

We also need vision – for a caring society rather than our present one which validates uncare, values economic growth above everything and social care is in a disgraceful state. Oliver Burkman has argues that pessimism is useful and improves outcomes whereas some argued that one must be positive. Paul referred to Gramsci’s phrase ‘pessimism of the intellect and optimism of the will’ – looking the worst in the face and maintaining hope and intention.

Do we need supportive spaces to share our personal reactions to climate change and the information we’re getting as we work for a better society (eg the news)?  Do we want to follow this discussion up in some way?

Any responses do feel free to email me, Gill, via exetertransition@gmail.com