Exeter is notorious for the congested traffic on its roads, particularly during peak periods. Road transport is a major emitter of carbon dioxide from fossil fuels, contributing to climate change; diesel engines emit nitrous oxide and particulates, pollutants that adversely affect the health of people living or working near busy roads. Meanwhile, the government has designated the region around Exeter as a major growth area and these problems with transport are almost certain to get worse as the city expands. For these reasons, we urgently need a transition to more sustainable forms of transport. 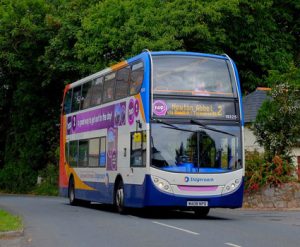 The Transition Exeter Transport Group is a small group of concerned people who constantly look for opportunities to persuade local authorities and private developers to build sustainable transport into their proposals. Over the past ten years, we have done this in co-operation with other local business, public and voluntary sector organisations that share a like interest, such as Exeter City Futures, Exeter University, the Campaign for Better Transport, Sustrans, the Civic Society and CWEST. Several of our members have helped set up the Exeter Cycling Campaign and the Exeter and District Bus Users Group. We used to meet together on a regular basis, but during the past couple of years, we have communicated on an ad-hoc basis by email through our own google group.

In 2014, we developed a vision of what Exeter might look like in the mid 21st Century, and one of our members, Trevor Priest, has since produced a detailed analysis of rush hour transport in Exeter, which has been circulated to local authorities.

With this in mind, we have responded to many public consultations on development policies and proposals, such as:

All are welcome to join our email discussion forum. We would love more people to help us update our vision and strategy and bring new ideas to the group. If you would like further information, please email admin@transitionexeter.org.uk or ring Sue Kay on 01392 204253.